I’m a shy person. Quiet might be a better term. I don’t typically lead conversations, and I often think of things I might contribute but then let them  go unsaid forever. Some might say that this sort of personality is a strange thing, and I used to hate this trait in myself, but somewhere in the mess of high school and the experience of college, I’ve grown to appreciate my character more.

You see, words are such a powerful thing. When spoken, each and every syllable carries significance as each and every sound and inflection speak meaning. The way that we say things, the order, the pitch, the choices we make, have the biggest impacts.

But I’ve come to realize that I don’t need to have a lot of words – one simple word might carry the same weight as a string of sentences threaded and weaved together. I think both of these ways are just as perfect as the other.

Sometimes I just don’t talk a lot. Some people assume that I’m uncomfortable, or maybe that I don’t like them. Sometimes, I’m perceived as a snob. Really though, I love conversations and listening and I don’t always feel the need to add words. I don’t think a conversation needs to consist of back and forth speaking, equal words from both sides. I believe one can contribute equally to a conversation with few words, maybe even with no words at all. It’s all about an exchange – an exchange of sense, of meaning, of feeling. Presence alone gives this. Words have specific denotations, but there are also so many other ways of sharing and communicating. I like to find those ways…

Baking is a way I communicate without speaking. It can display my mood. It can express love. The process itself is more for me, learning about myself, spending time to reflect on my surroundings, having a moment alone. The outcome though, it’s for me to share – to communicate with the people around me, to communicate with you as you read this now.

I made this blueberry lemon bread for family and a few friends. It was for you, too. In making it, I was able to unwind after a day that left me upset. I then happily shared it with some people who each carry special places in my life. And now, I’m able to use it to communicate even further, with you. For you to enjoy the photos, hear a story, and then maybe follow the recipe for your own loved ones.

I’m really loving this adventure of blogging I’ve started, and this new way of expressing myself – this place where I can be “quiet” but still communicate. Where I can be shy, but not so unspoken.

And I really hope you do make this sometime or another, as it was so simple to make, but so perfectly sweet and tart with the combination of fresh blueberries and lemon. The inside dense and moist, speckled with blueberries and lemon zest, and completed with a yummy crumb topping. It’s like a blueberry muffin, but better and in bread form!

Recipe makes three mini loafs, or one 8X4 inch loaf, Can also be used in muffin tins for 24-36 muffins

1 ½ cup fresh or frozen blueberries (If using frozen, do not thaw)

Zest of one lemon

For the Crumb Topping:

In a large bowl, beat the butter, sugar, lemon juice (note, zest your lemon before juicing it), and eggs together. Add about half of the self-rising flour, then the milk, then the other half of the flour, beating well after each addition. Once well combined, gently fold in the blueberries and lemon zest. (Note – toss the blueberries in a bit of flour before folding in, and they shouldn’t sink to the bottom as much) Pour batter into 3 greased mini loaf pans or one larger 8 inch by 4 inch loaf pan.

To make the crumb topping, combine the butter, flour, and sugar in a small bowl. Use fingers to mix together until a crumb forms, leaving some crumbs larger than others. Sprinkle crumbs over top of each loaf, gently pressing down a bit so it sticks.

Bake at 350 degrees F for 18-20 minutes, or until toothpick inserted comes out clean. If using one larger pan, it will need to bake about 60-70 minutes. Cool at least ten minutes before removing onto a wire rack.

Note – If using all-purpose flour instead of self-rising flour, add in 1 teaspoon of baking powder and ½ teaspoon salt when adding the flour.

Another note – I like to used browned butter in the batter to give it a subtle rich and nutty flavor. Try it, I think you’ll like it! It’s really not very complicated, just heating the melted butter a bit extra, but the results are crazy awesome. Technique here.

Update: If making muffins, fill muffin tins with cupcake liners 2/3 to 3/4 full and top each with crumb topping. Bake 15-20 minutes, starting with 15 and checking center with a toothpick. It should come out mostly clean with possibly a few crumbs clinging on.

Recipe adapted from Taste of Home.

I vividly remember the mornings of my childhood that began with cinnamon rolls. These mornings were always the best – my mom would quietly poke her head in my room and whisper, “Bea, time to get up” or sometimes in her silly mom voice, “wakey, wakey!” Immediately upon waking, I could smell them. The aroma of sweet rolls seemed to overtake the entire house, inviting us to leave the warmth of our beds to fill our tummies.

My sisters and I would race downstairs with the hopes that no one had squeezed the packet of icing onto the just baked rolls, as we wanted to do it. When we did get our wish, we always made sure that while doing so we claimed a certain roll to be ours. (And of course, after claiming it, we always made sure to put just a bit extra icing on, for all of our hard work.)

Cinnamon roll mornings were special. Often it signified the first day of school or a birthday, but occasionally, I think our parents just wanted to spoil us.

These mornings always seemed to be during the school year, and they managed to brighten up the rest of the day. Not only did they taste wonderfully and make my belly full and warm, but I also had something to tell on the playground.  It was an opportunity for one of those little kid bragging moments for me – I got to proclaim that I ate cinnamon rolls for breakfast while hearing all the other students get excited for me, exclaiming their appreciation with a  “lucky duck!” or “your parents must be awesome!” I cherished that attention. It wasn’t necessarily to make the others jealous, but to share in my excitement. Now that I think back on it, it really was quite a trivial thing to be so excited over, but I really loved those special mornings with the cinnamon rolls. 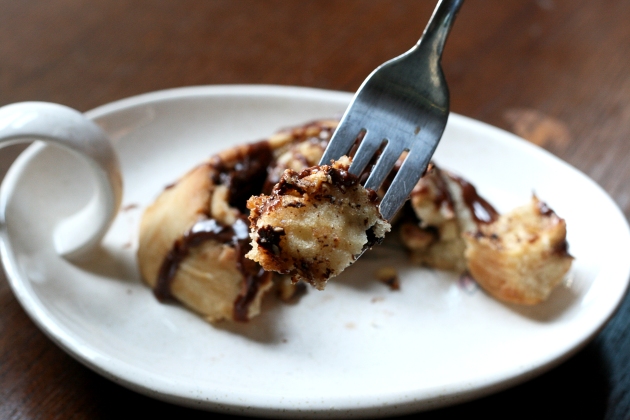 I love giving cinnamon rolls to people, and I think it’s partly due to these fond memories of cinnamon roll mornings. But also, it’s the taste, the gooey center, the individual rolls baked together as one, the sugar and butter, and the process of making them that I love so much. A cinnamon roll is so simple, yet it’s also sophisticated. It’s been proofed, mixed, kneaded, raised, rolled out, sprinkled with toppings, rolled back up, cut, raised again, and baked.  But don’t let that intimidate you, because although they take some time to make homemade, the process is fun and messy, easy and oh so rewarding.

These cinnamon rolls are taken to the next level with the addition of dark chocolate and toasted hazelnuts. They taste a bit like nutella, but still have a touch of the classic cinnamon taste.

For the dough, heat the milk, vegetable oil, and sugar in a medium saucepan over medium heat until sugar dissolves. Set aside and cool until about 115 degrees F. If you don’t have a thermometer, make sure it’s pretty warm, but not scalding. Sprinkle the yeast on top and let it sit on the milk until frothy.

Add 4 cups of the flour. Stir until just combined, then cover with a clean kitchen towel, and set aside in a warm place for 1 hour. After 1 hour, remove the towel and add the baking powder, baking soda, salt, and the remaining ½ cup flour. Stir thoroughly to combine.

To assemble the rolls, on a floured baking surface, roll the dough into a large rectangle, about 30 x 10 inches. The dough should be rolled very thin.

To make the filling, brush the melted butter over the surface of the dough. Sprinkle the brown sugar on, then cinnamon (I used about 1 full teaspoon), then the hazelnuts and chocolate. Add more or less of each filling ingredient, the proportions are all up to you!

Beginning at the end farthest from you, roll the rectangle tightly towards you. Use both hands and work slowly, being careful to keep the roll tight. When you reach the end, pinch the seam together and flip the roll so that the seam is face down. Slip a cutting board underneath the roll and with a sharp knife, make 1/2-inch slices. Alternatively, used thread or dental floss to cut the slices. You should end up with around 20-25 rolls. Pour a couple of teaspoons of melted butter into round cake pans and swirl to coat. Place the sliced rolls in the pans, being careful not to overcrowd. (Each pan will hold 7 to 9 rolls.)

Preheat the oven to 375°F. Cover all the pans with a kitchen towel and set aside to rise on the countertop for at least 20 minutes before baking. Remove the towel and bake for 15 to 18 minutes, until golden brown.

While the rolls are baking, make an icing. I made a simple chocolate icing by whisking together 2 cups powdered sugar, 2 tablespoons cocoa powder, 2 tablespoons milk, and ½ teaspoon vanilla.

I think a drizzle of nutella would also make a lovely and simple topping.

Remove pans from the oven. Immediately drizzle icing over the top. Enjoy these all to yourself, or better yet, share a pan with some loved ones!

So I have this thing for coffee. It’s essential to my days. My coffee must be black, unless it’s a fancy schmancy latte from a hip coffee shop.  Even then, the espresso must outshine the sugary syrup.  I simply love the bitter taste, rich aroma, and warm feeling that coffee gives, and I don’t want so much fuss covering it up.

Biscotti are nice with coffee. Tea too. The perfect breakfast for a perfect morning. 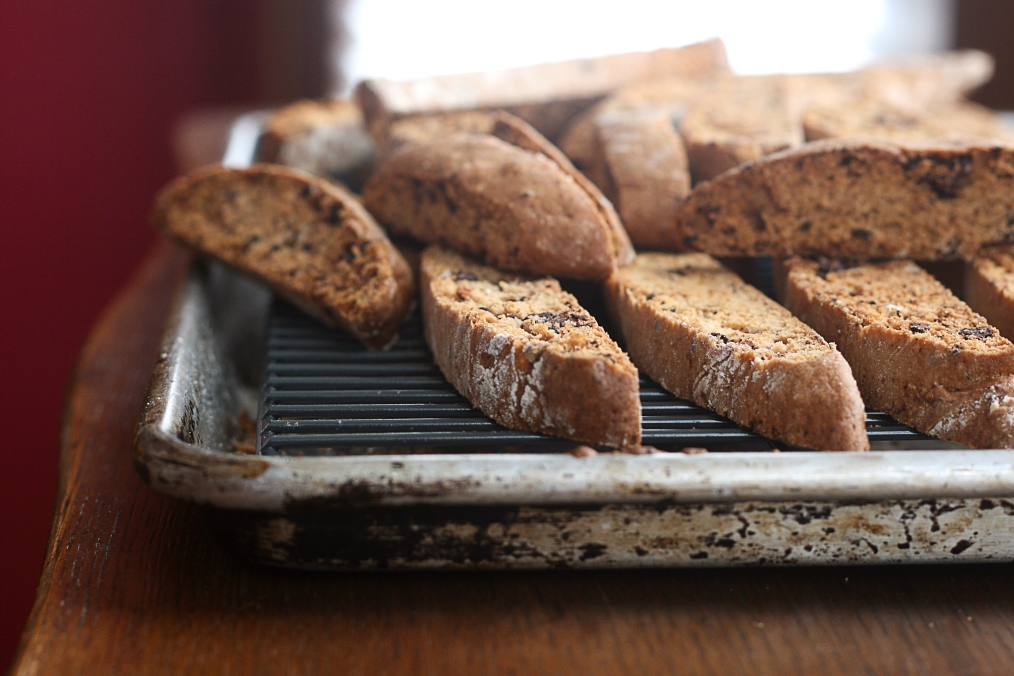 These Chocolate Strawberry Biscotti are –

crunchy, waiting to be dipped in coffee or tea

the aroma of a perfect morning

Mornings are worth being lovely, take time for a hot drink and indulge in these twice-baked biscuits. 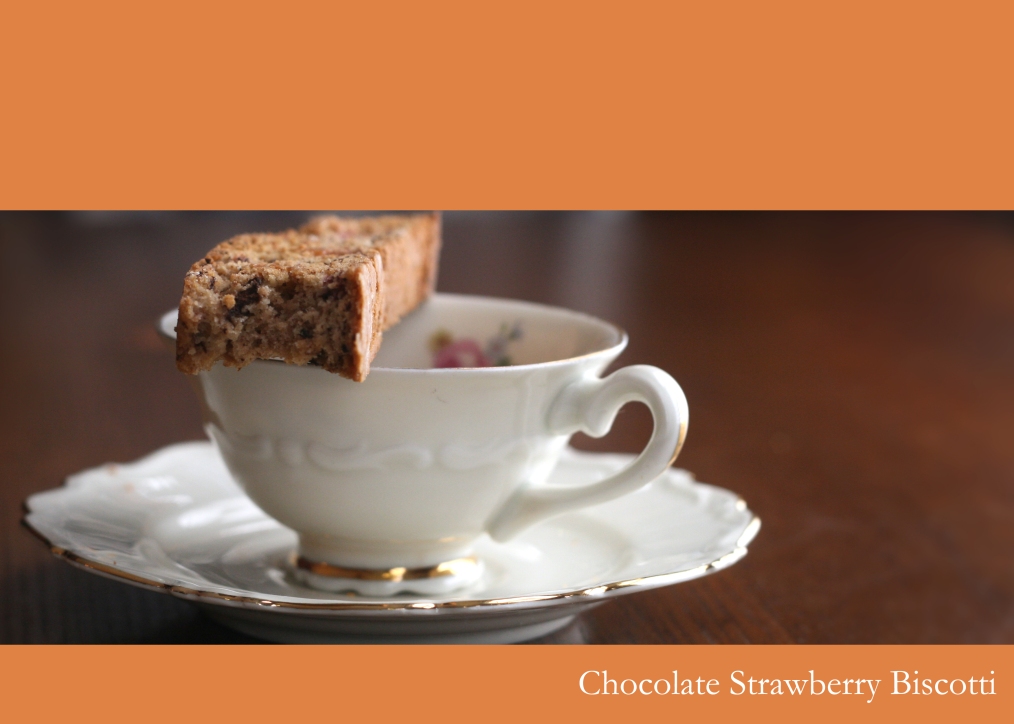 In a small pan on medium heat, cook the strawberries and sugar, slowly bringing to a boil. Set aside to cool. There should be a few strawberry chunks, leave those it.

Preheat oven to 350F. Butter and flour a large baking sheet. In bowl, whisk together the flour, baking soda, and salt.

In a mixer bowl, beat the butter and sugar together until light and fluffy. Add eggs and beat until combined.  Fold in the cooled strawberry mixture, then stir in flour mixture to form a stiff dough. If it’s too wet, add a bit more flour. Add chocolate and stir just until incorporated.

Flour hands, and then on the prepared baking sheet, form the dough into two slightly flattened logs. They should each be about 12 inches long by 2 inches wide.

Bake for 35 minutes, or until slightly firm to the touch. Let cool for about five minutes, then move to a cutting board.  Cut diagonally into ¾ inch slices. Arrange sliced side down onto the baking sheet and bake until crisp, about 10-15 minutes more. Cool on a rack and store in airtight containers.